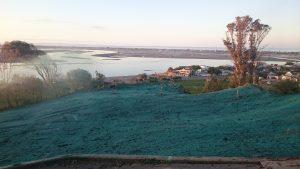 A well protected site where soil binding co-polymer was applied to significantly reduce erosion risk. The Estuary of the Avon and Heathcote Rivers / Ihutai is protected from sediment runoff from this site (Source: RST Solutions Limited).

Soil binders form a cohesive membrane or protective crust. This surface reduces windblown dust generation and reduces the erosive effects of rain impact by around 90%.

They might be liquid or powdered, and organic (eg guars, latex or various other timber resins) or chemical (eg acrylic copolymer, anionic bitumen emulsions or cementitious gypsum- or lime-based). They are sometimes called soil-stabilising agents.

Soil binders are very useful against both wind and water erosion.

They prevent or reduce the movement of dust from disturbed soil surfaces, which is important because dust creates health hazards, traffic safety problems and off-site damage. Wind and weather patterns in Canterbury make us especially prone to dust problems, and since the quakes we have had an increased number of road works and construction sites which create dust.

Some soil binders are also included in hydroseeding or hydromulching operations to tack seed and/or wood fibre to the soil surface on steep slopes. A granular form of calcium or magnesium chloride may also be used to absorb atmospheric moisture and suppress dust on active haul roads and access tracks. 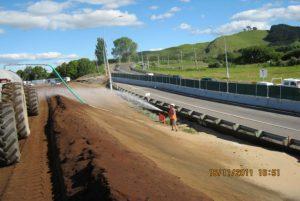 There is no formal design procedure for soil binders, and products on the market are changing all the time. Follow these general principles:

When constructing and operating soil binders